The Beauty of Terrible Stories (Part 2)

I guarantee this post isn’t going to make much sense if you don’t read Part 1 (previous post).  So do that.

Also, before we move on to the joys of Supermarket Mania 2, I want to share a TED Talk with you.  It’s one you may have seen, but as it pertains to creativity and education, I feel it is my duty to pass on the message to those who haven’t.  This guy is funny and has an enjoyable accent.  Watch it, please.

Okay so Supermarket Mania 2, by G5 Entertainment (available as an iPhone app, which makes waiting rooms 12% more tolerable).  I’m only going to recommend the sequel, as the first game is a bit buggy.  Don’t worry about missing any of the drama, though!  That’s what this blog post is for!

The plot of Supermarket Mania (the first): A young woman named Nikki goes to work for an obviously evil man named Torg at his obviously evil supermarket.  Because we all know how evil those supermarkets can get.  Torg’s supermarket serves as a training ground for Nikki and her new friend, Wendy, before they are fired (and replaced with EVIL robot workers).  Wendy’s one and only personality trait is that she likes to eat.  She’s not overweight, mind you.  She just likes to eat.  Pretty much everything she says garners a response of, “But Wendy, you just ate!” or, “Wendy, you cow, stop thinking about food.” 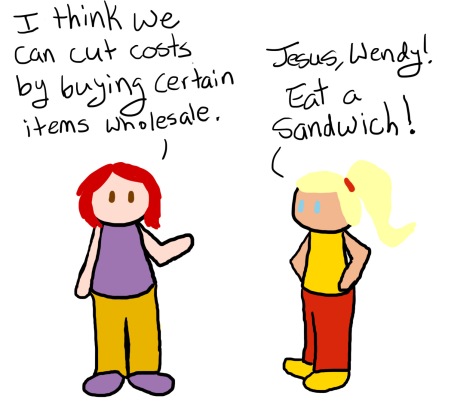 Anyway, Wendy and Nikki find an old man who wants nothing more than to start his own grocery store that is full of love and wholesomely bland foods.  They do so.  This somehow puts the Evil supermarket out of business.  White people cheer all around.  (There are no people of color in this game.)

The plot of Supermarket Mania 2: Nikki is still running bland supermarkets!  Through her love and compassion (because that’s what people are really looking for in a supermarket) she succeeded in drumming up a loyal clientele.  There’s Old Lady, Regular Type Lady, Mom, Teenager, Girl with Scooter, Yuppie (I swear that’s what they call him), Thief (She doesn’t actually like this guy), and Celebrity.  They all come and go, and everything seems great for Nikki and her ever-growing list of White pals.  Except Torg is still evil!  And he is bent on getting his revenge by doing stupid things like causing traffic jams outside the store and painting the word “SALE” on the window.  Spoiler alert: None of these plans succeed.

But the best scheme by far is that Torg will stroll into the market, wearing a trench coat and a fedora, and use a giant, wooden mallet to break Nikki’s various machines.  It is worth mentioning here that Nikki has a security guard in her employ.  Mr. Blowfist… or Barefist… or Bareknuckle.  Something vaguely obscene.  His job is usually to stop Thief from thieving (Swiper no swiping?), but he’s never around when Torg comes by with his mallet of doom.

Anyway, I couldn’t resist taking a screenshot for this one.  Because sometimes you can hire someone to help you with your various tasks, and those employees will do nothing to stop a man in a trench coat from smashing the juice squeezing machine.  They will watch him do it with a smile on their face.  Look: 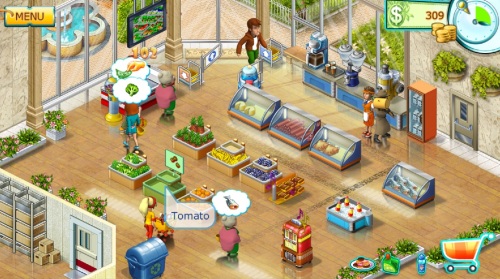 Do you see it?  Do you see what’s happening here?  Let me help, just in case you’re lost:

Okay, so now you get it.  I suppose Nikki doesn’t pay the woman in the orange dress to stop people from sabotaging the machinery.  Hell, Nikki doesn’t really pay her at all.  She purchased her for $1,200.  One-time fee.  I imagine Orange Dress would politely ask Torg not to crush the machinery if only she were allowed a paycheck or a union-mandated break.

That’s all I’ve got!  We’re going to move on to a more serious subject next time.  Fair warning.

The Beauty of Terrible Stories (Part 1)

Where have I been?

Not to the dog.  I didn’t get married to Radar.  I just like this picture a whole lot.  And you don’t need to see my husband.

I also had a birthday, which turned me 25 years old.

Then I finished my new draft of Grotesque, reread it twice, and sent it to my agent.

So yeah, I’ve not had a lot of time to blog, nor have I had many things to blog about.  The thing is, there is one subject I’ve been meaning to touch on for a while now, and that is the hilarious and inspiring stories that I encounter every day while playing time management games.

For those who don’t know, time management games are a type of clicky, iPad game where you control a character (or characters) to make them complete a set of tasks within a time limit.  It involves managing your time properly, hence “time management.”  I am addicted to these games.  It all started with Diner Dash, which I absolutely loved until it went the route of Facebook games.  More specifically, they wanted me to pay them to turn my real money – which can be exchanged for real goods and services – into fake money – which can be exchanged for fake goods and services in an extremely limited capacity.

I never understood that.  It made no sense to me that people would pay money for like… Farmville or whatever.  But I had already paid to own Diner Dash!  So it was cruel and unusual to ask me to pay even more money on a regular basis.

But that’s beside the point.  The games I love most now are called Gardens Inc. (1,2, and 3), Supermarket Mania 2, and Jet Set Go! (Their exclamation point, not mine).  I want to share some stories about their stories.  I wish I could use a ton of screenshots, but I don’t know what’s going to push me beyond the safety of the Fair Use Act.  Instead I’ll illustrate some of my points using Mini Bex, as per the norm.  I will also say that I love these games.  I bought them and have played them all multiple times.  So this is free advertising for them, because I am recommending here that you buy them.

Today we’ll start with Gardens Inc., which was created by an infinite number of developers.  No just three I guess.  Intenium, World-Loom, and Nitreal Games.

The thing about these games is they often have ridiculous settings.  The best example is Supermarket Mania.  You play a young woman named Nikki who runs a supermarket.

Perhaps the developers are aware of this, because they try to offset the mundane environments with over-the-top plots.  These plots often include Villains (with a capital V!).  And they are the best Villains, as you’ll see.  Here are the plots of Gardens Inc 1, 2, and 3:

Gardens Inc. 1: From Rakes to Riches – You play a young woman in overalls named Jill.  Jill’s grandparents live in a dilapidated villa and owe money to a man who wears a snow-white suit and sunglasses all the time.  This man’s name is Cliff Gold.  How much money do Gramma and Grampa owe?  A cool million.  How is Jill going to help them come up with the money?  By winning a gardening contest, of course!  A gardening contest that comes with a grand prize of a million dollars.  Because such contests exist!

Gardens Inc. 2: The Road to Fame – You play Jill again.  Jill and her platonic (for now) business partner, Mike, are starting their own company.  It’s called Gardens Inc.!  Did we mention they garden?  Well, they don’t just do that.  They also renovate fountains, Japanese pagodas, park benches, flooded footpaths, and two (Two!) different kinds of staircases (wood and stone).  Guess what?  Another gardening contest!  This one run by an 129-year-old woman who is a “famous” gardener.  Her name is Lady Bloom (duh!).  But also there’s a thief!  And the villain from the previous game, Cliff “I have a closet full of white suits” Gold, is also back for some reason!  And then Mike gets kidnapped!  By Cliff Gold!  Jill has to save him!  How does she do that?  By gardening, of course!  Because, thankfully for Jill, all of her problems can be solved with gardening.  It would be a real bummer if she was an expert gardener but the only way to solve her problems was through a series of fashion design related tasks. 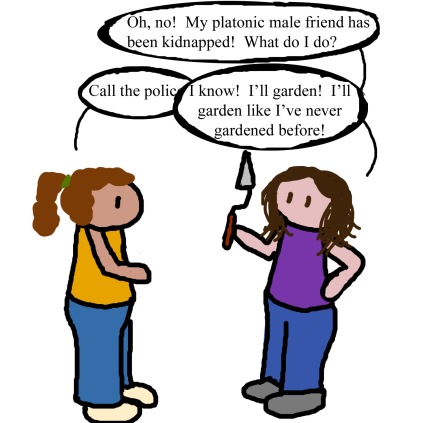 Gardens Inc. 3: The One With a Wedding – I forget what the subtitle for this one is.  Hold on… [Looks it up] A Bridal Pursuit!  That’s it.  Jill and her no-longer-platonic friend, Mike, are getting married!  But also they are trying to expand their gardening business internationally, which isn’t going so well because of the new villains, Max and Lydia Perfect.  Max wears a Hawaiian-print shirt all the time.  So you know he’s trouble.  They also garden and for some reason are trying to sabotage Gardens Inc.  Also Jill and Mike’s wedding rings get stolen, and there’s some French chick named Nicole?  And um… something about like… weird ancestry?  And caves?  This one lost me a little.  But you can bet they solve all their problems through gardening!

I highly recommend these games, as I said.  They are unique and challenging, with proper difficulty curves and an abundance of different levels.  Each level comes with a clue for a “Bonus Design Award” where you can plant the right colors of flowers for extra points.  But the “clue” is often something like, “Think about stripes!” or, “Everything!”  And then you just know to make stripes or use every type of plant.  Not so much a clue as a direct, explicit instruction.  Still fun, though.

So what’s the point of all this?  Why talk about the ridiculousness of clicky-game stories?  Well, where else do you get to get away with shenanigans like the kind listed above?  It’s so refreshing and fun.  You can laugh at it, but still be engaged by it.  Sure I don’t give a toss about Jill’s grandparents.  They look old enough to live comfortably in a retirement home.  And sure the mayor of her town wears a top hat.  It’s absolutely ridiculous, but it’s fun to play along and pretend there really is a universe where gardening is the end-all-be-all for everyone’s livelihood.

The only other medium where you can be as crazy as that is manga, I think.  Like, my favorite manga is about a family that has been possessed by the spirits of the animals of the zodiac, and anytime they get hugged by someone of the opposite sex they turn into their respective animals.  So yeah… sometimes crazy, outlandish stories are fun.