According to WordPress I have been blogging for three years now.  I’m not sure that’s something to be proud of, but I might as well keep on trucking while I figure out if I should be ashamed or not.

I wanted to say a quick word about “strong female characters.”  Well…I mean it started with me thinking about characters, but I guess I could apply it to real life as well.

Well…no.  In the end I decided that this is just not the right way to look at things.  Not all women need or want a man in their life, but that doesn’t mean that a woman who does desire male company should be disparaged or belittled for her choices.  Not even her choices necessarily.  More like…her nature, I guess?  In my books I try to avoid the idea of “man rescues woman.”  Most of my female characters tend to rescue themselves, but occasionally they also get helped to do that by their supernatural boyfriends or whatever.  And that’s fine.  There would be a problem with them expecting to be rescued, I suppose.  But if they’re in a sticky situation or they’re in a little too far over their own heads, well…it wouldn’t hurt for them to acknowledge the need for help.  The gender of the person/creature who provides help should be incidental.  What it boils down to is the difference between this: 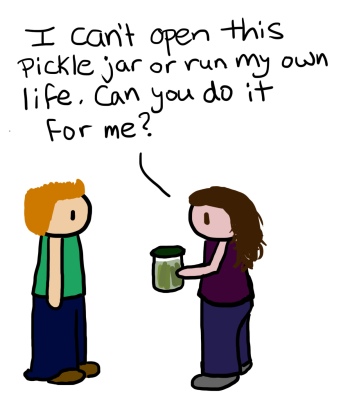 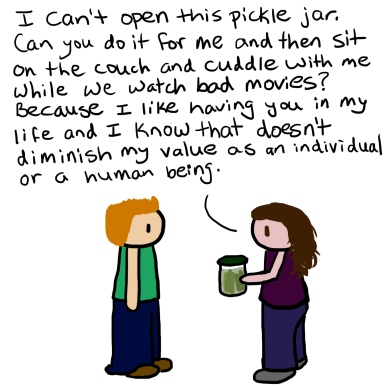 Okay I’ve officially made a mess of things.  This blog post started with those two images because they were inspired by all my thoughts about what it means to be a “Strong Independent Woman” and all the implications behind that title.  But then I had to try to put my reasons for drawing those pictures into words and it didn’t work out so well.  Hopefully you get the gist.

That’s all for now!

I need to get a life.