Phew!  After many grueling days of procrastinating, I finally managed to:

It’s finally done.  And I am so much happier with the result than I thought I’d be.  It’s honestly very difficult to write a book without rereading at all until you’re done, because the whole time you’re writing, you’re thinking… 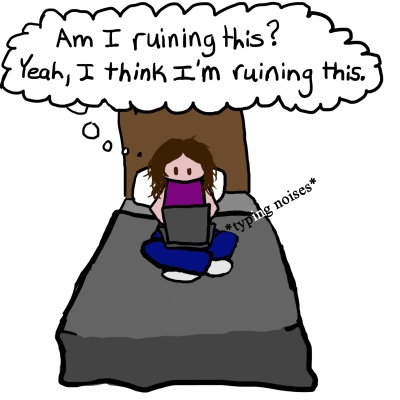 My fears were assuaged after my first read-through of the completed draft.  I’m not exactly going to post a compare-and-contrast look at the old manuscript and the new one, but here’s a list of problems I addressed:

What I want to talk about in this post is the method I used to bring the changes I wanted to see into fruition.  My friend Evelyn taught me a method of outlining called “story beats.”  It’s my kind of outlining because you literally just write a numbered list of things that are going to happen in the book, in the order that they happen.  You can use casual language, and you can write out details that will help you to write the book, even if those details are never explicitly stated in the manuscript.

I’d like to provide an example from the story beats I wrote out for Grotesque, so what you’re going to see is two story beats (written in block quotes so you can identify them easily) and then the corresponding section of book.  It’s amazing how much you can get out of just one paragraph of quick description of a scene.  The text of the book sample is going to be in italics because this part of the book happens to be in all italics.

2. Bastien returns home after a long day, ignores his parents as he goes straight to his room. He opens and closes the door very quickly. His room is strewn with books, and there is a large shelf stocked with potion ingredients. A small toy knight is sitting on his bed waiting for him. When it sees him, it jumps up and down, making tiny clanking noises. Bastien urges it to hush and calm down. His parents can’t hear what he has done because it was illegal.

3. Flashback: Bastien remembers going before the council. He has been researching the art of creating life for years, and he believes he can master it. He believes that with the right technique, certain objects could be made to understand and carry out tasks, maybe even help fight should another war begin. Some of Bastien’s cold ruthlessness begins to shine through as he talks. The Council is outraged by his speech and they tell him if he ever attempts anything like that, he will be banished or jailed or something.

That job had taken much longer than he had hoped. The moon and stars were shining brightly from the inky black sky as he walked home.

“Sweetheart, you’re back late,” his mother said as he pushed his way through the front door.

Bastien didn’t even glance her way as he headed to his room. He slipped inside as quickly as possible, shutting the door firmly behind him.

Little Lance was sitting on the bed, his tiny metal feet dangling over the edge of the mattress. He jumped up when he saw Bastien, ran over to him, bounced excitedly. Bastien tried to shush him. Little Lance was small – his head barely made it to Bastien’s shin – but his every movement resulted in metallic clanking that was loud enough to draw suspicion.

“Hush now,” Bastien said, patting the knight’s tiny helmet to calm him. “We can’t let Mother and Father hear you. Why don’t we do some quiet reading?”

The knight nodded its head excitedly, its miniscule visor flapping up and down with the movement. Bastien lifted him up and put him on the desk. The knight used his miniature lance – for which he’d been named – to help him balance as he crossed his legs and sat down. Bastien took off his robe and hung it by the door. He looked at the gold bands on the sleeves and the crown that was embroidered onto the right shoulder. A symbol of his rank. He was one of the most important crafters on the council. But it didn’t matter. It hadn’t mattered at all in the end. When he’d gone to them, asked them to listen to him.

“Manus knew it, too,” Bastien had said, referring to the man who had trained him in this trade. “We are taking on too much responsibility, Head Councilman. Many people here work the jobs of three men. I have been studying this subject for years. I can do it. Think of the possibilities!”

“That is enough, Councilman Garrison,” said Head Councilman Stefan Wiel. “Just saying these things out loud borders on illegal. You have been honored with the position of Royal Healer. Your lack of gratitude is disgraceful.”

“Why should I be grateful for a job that was forced on me?” Bastien demanded.

Stefan’s eyes had gone cold. “You will do a job that is worthy of the crown on your shoulder, or you’ll be stripped of your title and your council status. We will leave you with nothing. Do I make myself clear?”

Bastien let the memory fade as he reached out and ran his hands over the robe that had been made just for him when he was inducted into the council.

“I don’t know how much longer I can do this,” he said, turning to Little Lance.

The knight cocked his head at him. Bastien sighed and shook his head.

“You wouldn’t understand. Don’t worry about it.”

There you have it.  Hopefully you were able to see the difference between a story beat and the polished writing that comes out of it.  I highly recommend this method because it helps to prevent writer’s block before it even happens.  You set up the entire plot ahead of time, and it’s much easier to edit and tweak the story because instead of changing an entire book you’re just deleting/editing/moving a bullet point.  Over all, this method makes it much easier to put words to paper.  I am going to use it from now on.  That’s right.  I’m finally going to start outlining.  Hell probably just froze over.

One response to “Grotesque Success”